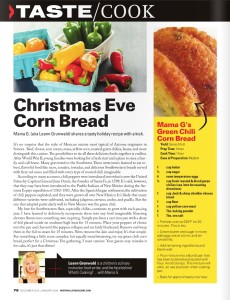 Mama G. (aka Leann Grunwald) shares a tasty holiday recipe with a kick.

It’s no surprise that the style of Mexican cuisine most typical of Arizona originates in Sonora. Beef, cheese, sour cream, masa, yellow corn, roasted green chilies, beans, and more distinguish this cuisine. The possibilities to tie all these delicious foods together is endless. After World War II, young families were looking for a fresh start and a place to raise a family and call home. Many gravitated to the Southwest. These newcomers learned to eat robust, flavorful food like tacos, tamales, tostadas, and delicious Southwestern breads served with fiery red sauce and filled with every type of roasted chili imaginable.

According to many accounts, chili peppers were introduced into what is now the United States by Capitan General Juan Onate, the founder of Santa Fe, in 1598. It’s said, however, that they may have been introduced to the Pueblo Indians of New Mexico during the Antonia Espejo expedition of 1582-1583. After the Spanish began settlement, the cultivation of chili peppers exploded, and they were grown all over New Mexico. It’s likely that many different varieties were cultivated, including jalapeno, serrano, ancho, and pasilla. But the one that adapted particularly well to New Mexico was the green chili.

My love for Southwestern flare, especially chilies, continues to grow with each passing year. I have learned to deliciously incorporate them into any food imaginable. Roasting elevates flavors into something awe inspiring. Simply pre-heat a cast iron pan with a sheet of foil placed inside on medium-high heat for 15 minutes. Place your peppers of choice into the pan and char until the peppers collapse and are fairly blackened. Remove and wrap them in the foil to steam for 15 minutes. Next, remove the skin and enjoy. It’s that simple. For something a little more complex, but equally mouthwatering, try my green chili corn bread, perfect for a Christmas Eve gathering. I must caution: Your guests may mistake it for cake, it’s just that divine!

Cream butter and sugar in mixer, add eggs one at a time, and stir constantly.

Pour mixture into a Bundt pan that has been buttered and dusted with flour. Avoid clumps. This mixture will stick, so use precision when coating pan.

Bake at 325 degrees for approximately one hour.